On the #SocialCircusDay, 4/3, held on an online event, which is related with the circus show ‘True Colors CIRCUS /SLOW CIRCUS PROJECT “T∞KY∞ -too good to be a bug-”’ in Ikebukuro on4/25 and 4/26.
Was held the online circus workshop, titled “SLOW CIRCUS SCHOOL -The WORLD- tookyoo Special version.”

Since 2019 April, SLOW LABEL has been holding workshop doing social circus once a month, called “SLOW CIRCUS SCHOOL.”
However, from last year, due to the COVID-19 pandemic situation, it is difficult to hold a workshop face to face, so we have an online workshop. And at this time, we hold it in the world.

Our guest is Erin Ball, a circus artist from Canada. We had registrations from foreign countries such as: USA, England, France, Colombia, India, and Singapore for the workshop. 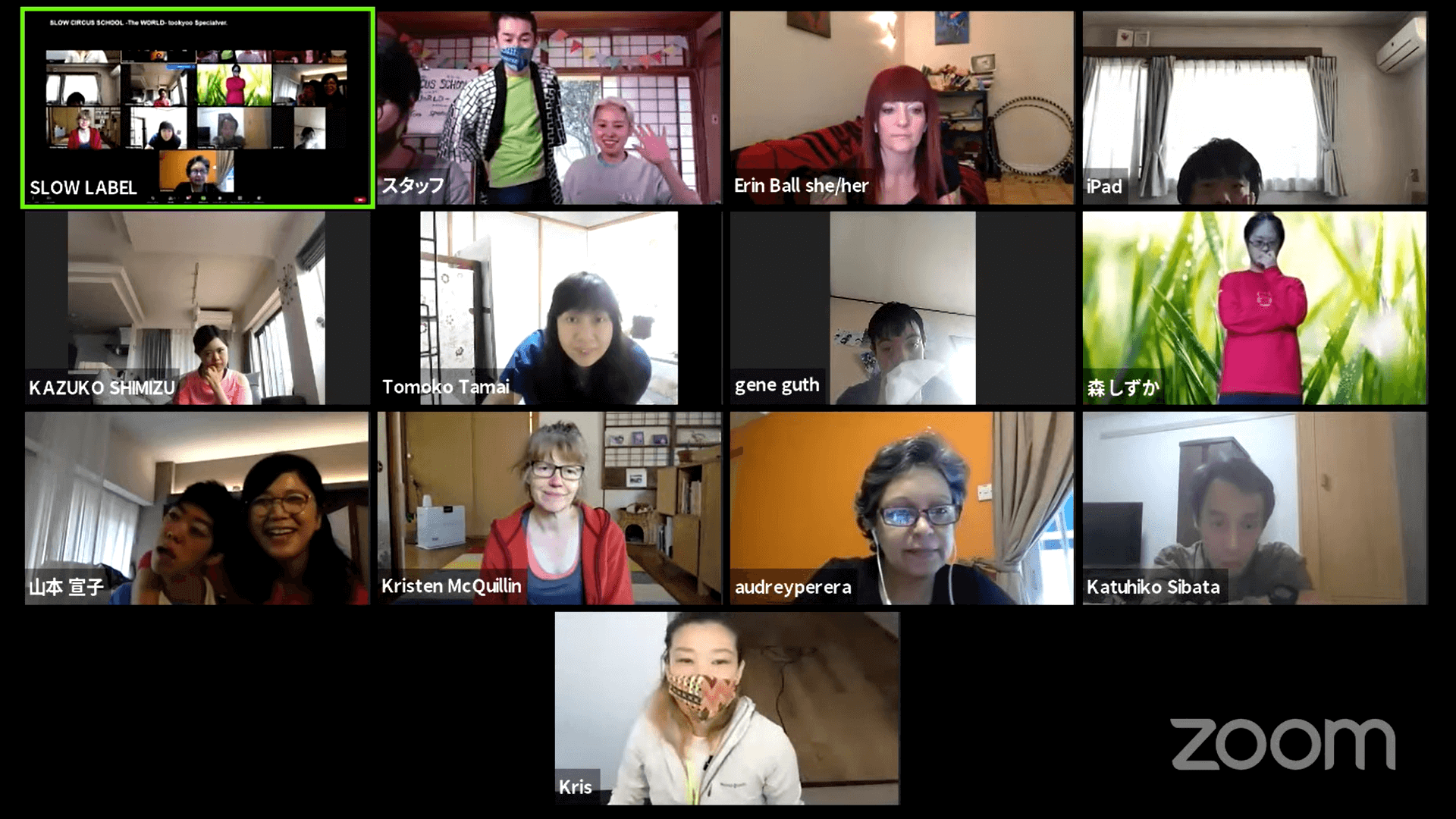 Had participants from all round of Japan, and also the performers of “T∞KY∞ -too good to be a bug-” join from their rehearsal space. 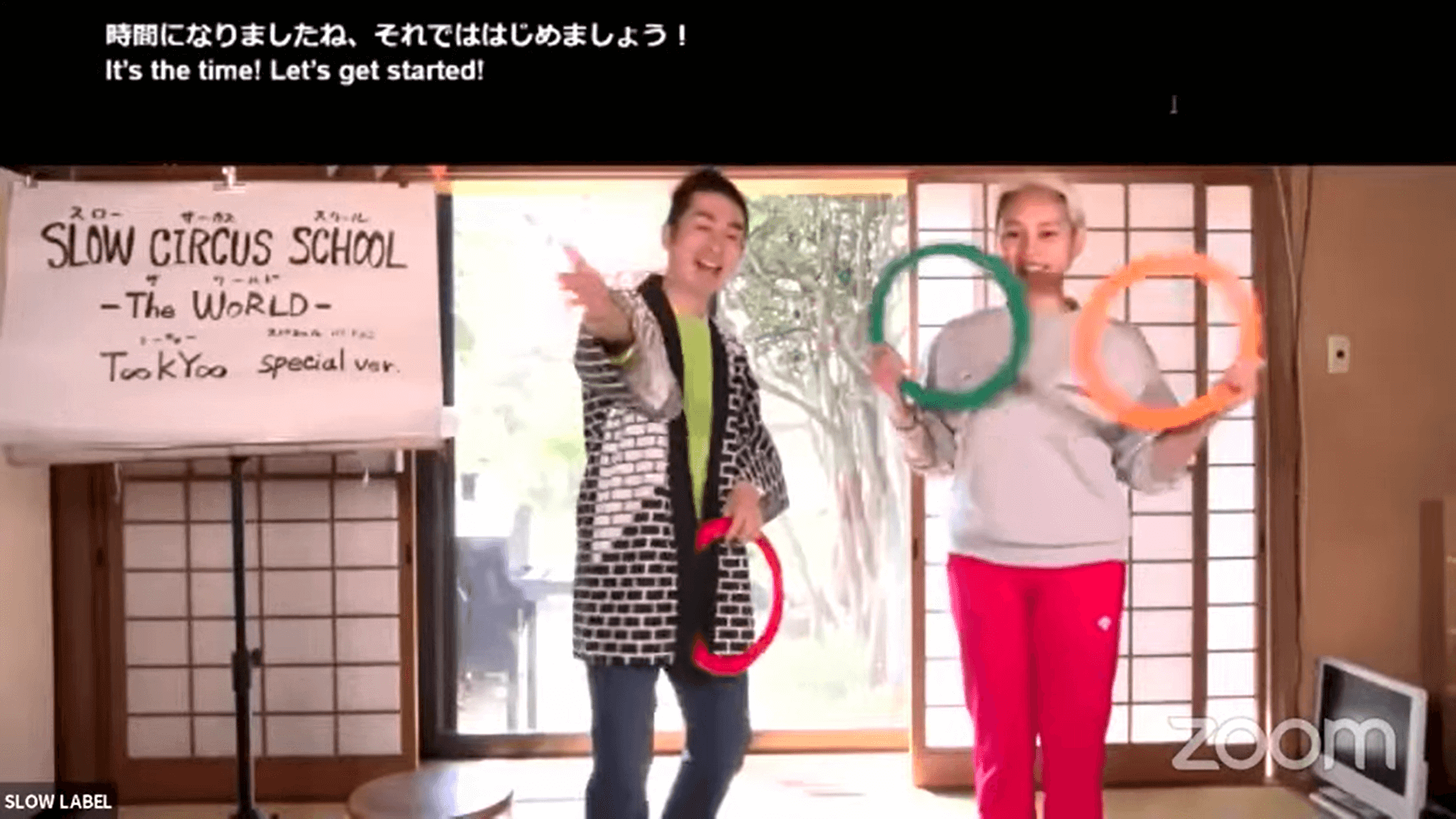 At the beginning of the workshop, Ayaka has started warming up, “COPY ME,” which copies instructor’s movement.
Trying to our bodies make woke up by bouncing whole bodies and raising both arms like up, side and down little by little.
Ayaka has roles: facilitator and translator, so she works very hard to do exercise and speak English and Japanese during the workshop. She was sweat and looked so busy.

Next work is that “Catch petals of cherry blossom.”
It is very good for spring season and sounds like so Japanese. Participants were catching by their own paces: someone catch one by one slowly, and another catch quickly as many as they can.
At the time when their hands hold full of petals, their bodies finished to warm up. 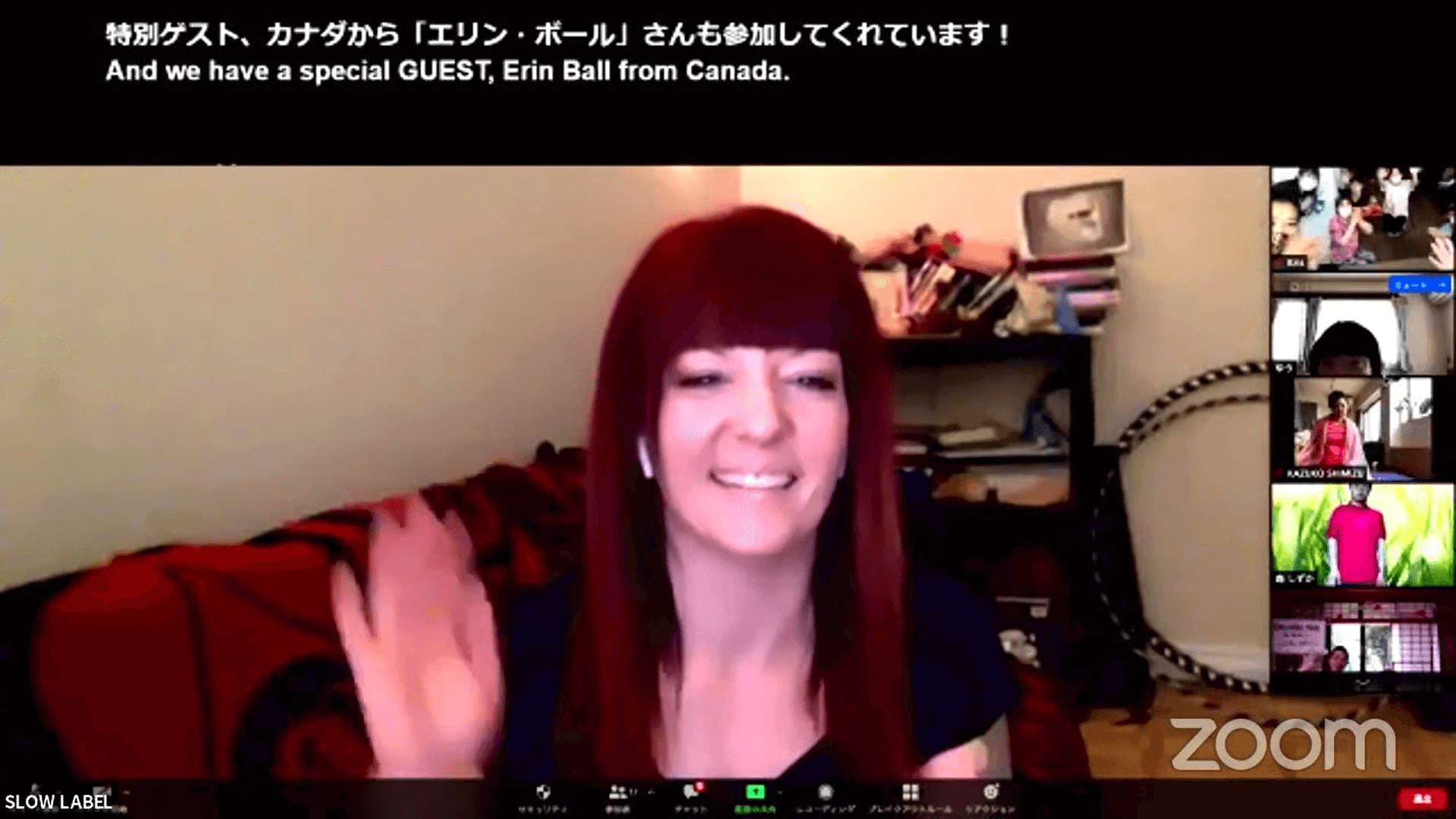 At the first, Erin does work that movement moves down on one’s body. Participants are starting at the tops of our bodies and working our way down through whichever parts move.  Moving to rotate from their heads, shoulders, chests, waists, hips, to legs by Erin’s suggestions.

We did two stretches: to lengthen the back side and the front of the body, then do a short choreography.
This choreography is that Vanessa Furlong, who created the company Legacy Circus with Erin, shared with her.
The way of choreography is that choose a moment to pick four different movements that work in our bodies that we can repeat.
In this time, Erin chose four movements for the participants.

Everybody does the same movements, but someone moves as big as one can, another moves as small as they can; also, Erin advised to adding in circus equipment, change the speed, do it in reverse and so much more. Even though they do the same choreography, every movements are individual. Also, the impressions are different. That is very interesting.
The participations arranged their choreography when they feel familiar with the movements.
And Erin enjoyed these differences. 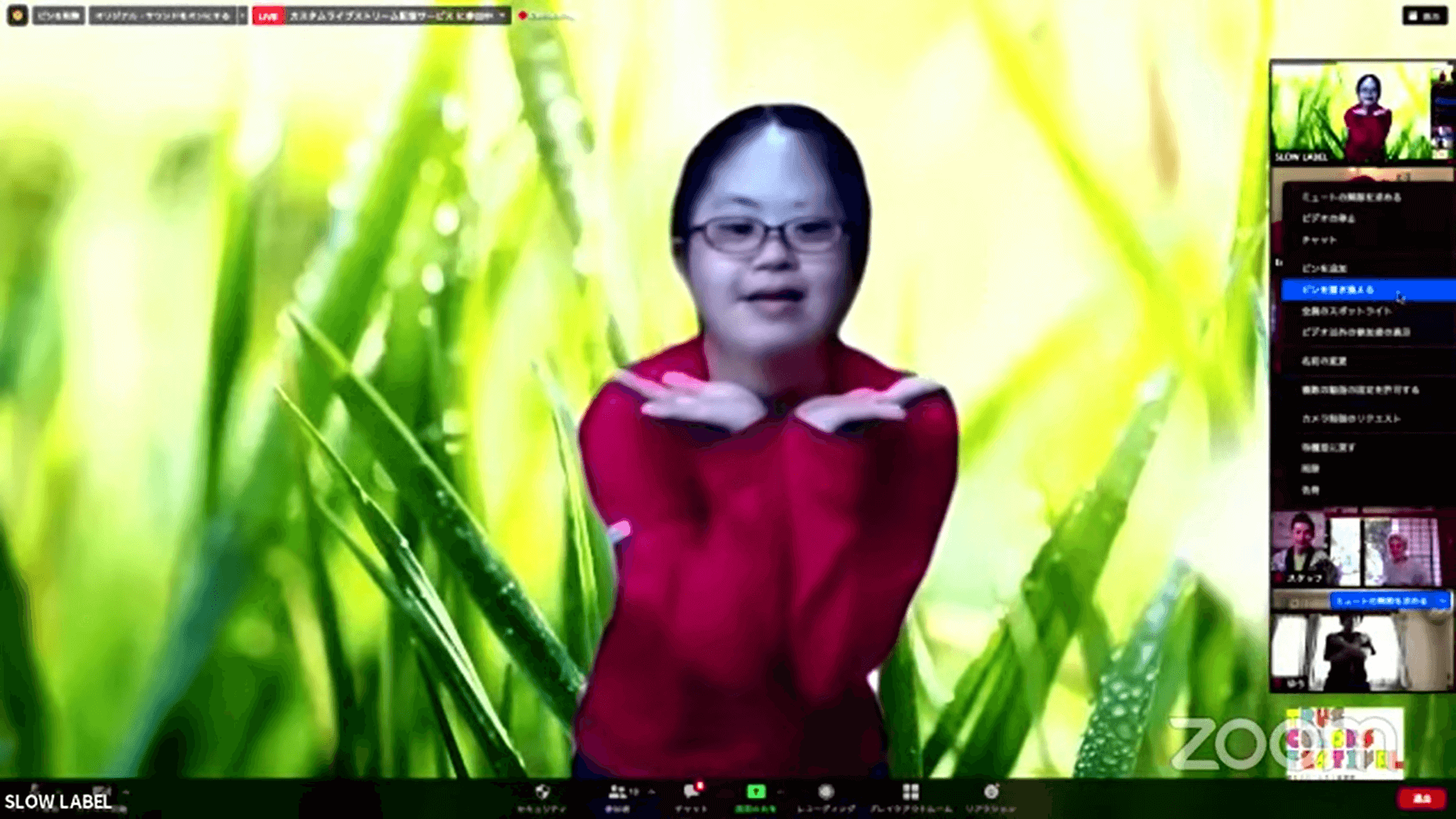 The next is ORIGAMI exercise.
They do origami play with their bodies, and think how create own movement by inspiring from the origami. 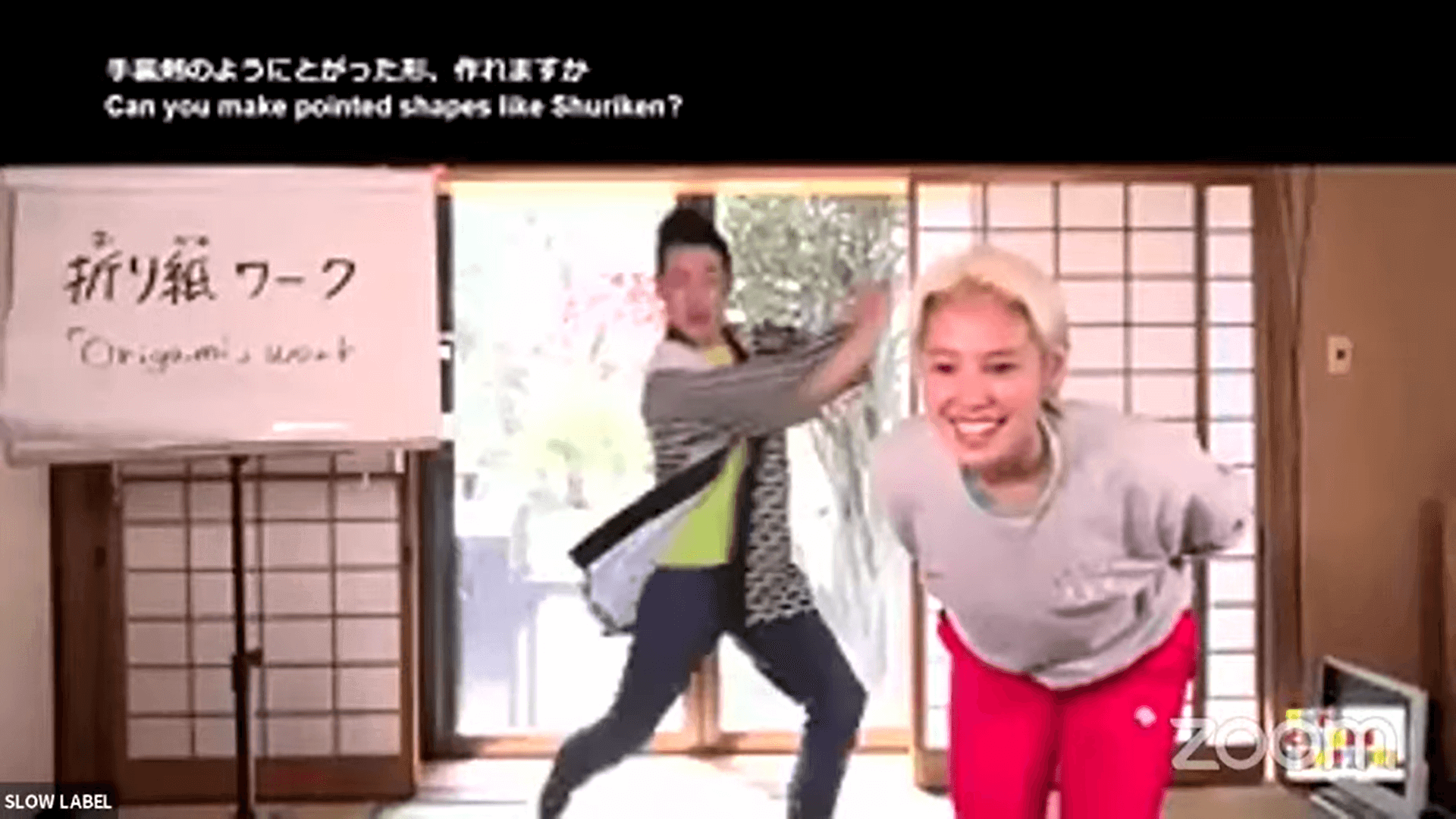 Our theme of origami is a “crane” and, “Shuriken,” which is Ninja’s weapon.
Everybody flaps their arms like wings, then moves by imaging Shuriken.
Someone throws Shuriken like a Ninja, and another makes pointed shapes like a Shuriken shape, so participants are moving by their thoughts.

They affect each other’s movements; therefore, more and more movements are various.
Feel relax, and they are smiling. 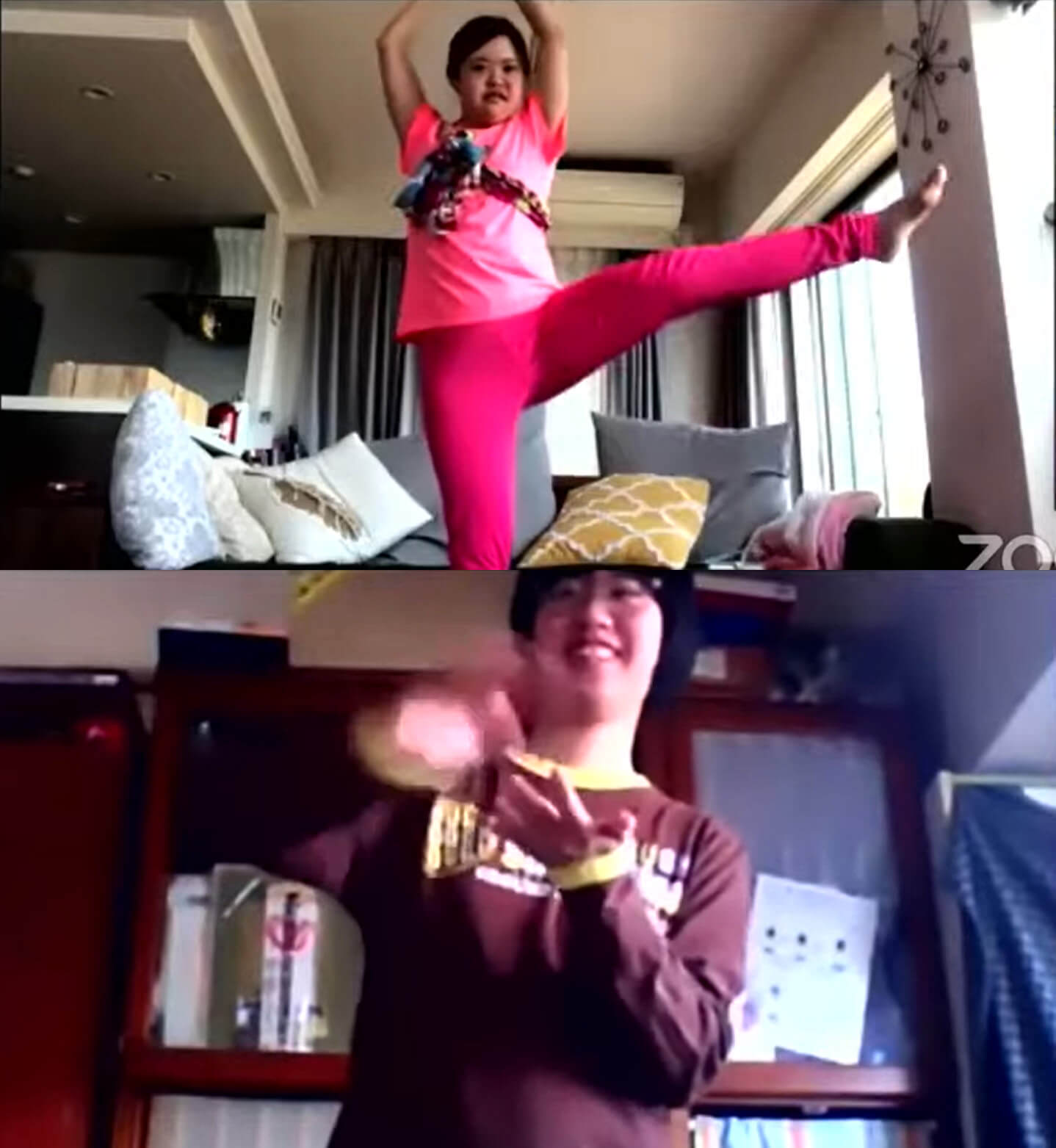 The next workshop is world greeting.
Greet to other participants with various greeting way. In Japan, we greet with bow, how greet in other countries. 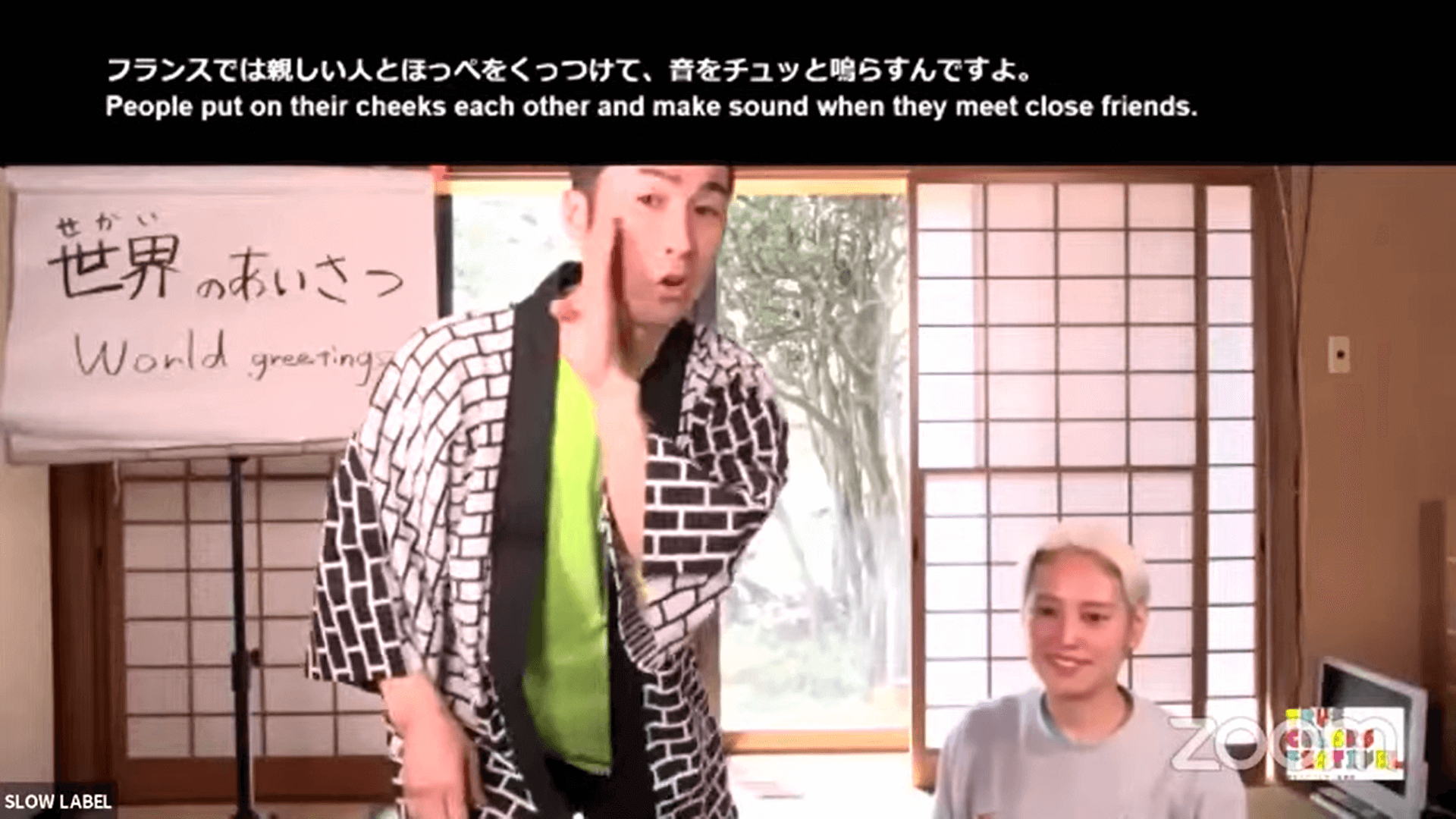 We do hugs, kisses, shaking hands, and putting hands together with bowing as greetings. Also, we put our elbow with one’s elbow in COVID-19 way to greet.

“Greeting” has many cultures and ways to do in the world.
We thank to participants for spending time together with people from different cultures.

After short break, we do final work.
That is a choreography in the circus show ‘True Colors CIRCUS /SLOW CIRCUS PROJECT “T∞KY∞ -too good to be a bug-.”’ The performers, participated in from the rehearsal space, took the opportunity and danced enjoyable as much as they can. 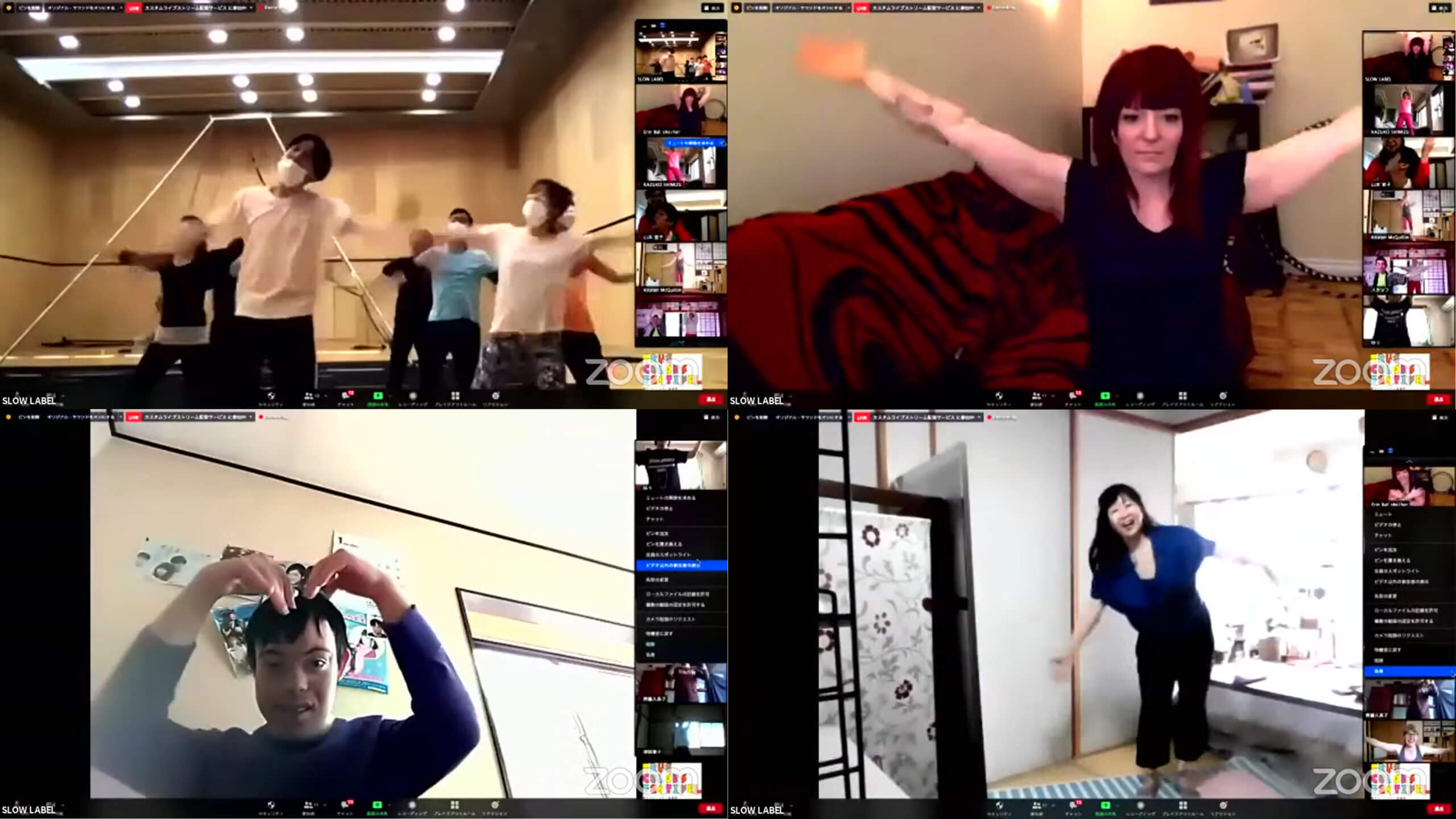 In a short time, everybody could dance the choreography. This choreography and music are exactly the same as the performers will dance in the “T∞KY∞ -too good to be a bug-.” We could do prepare for the show as a doing today’s workshop.

Time was up, but participants could dance perfectly.

At the end of workshop, we sent our “Hugs” and the “Power of Love” each other even though we are in difficult situation to see people nowadays. 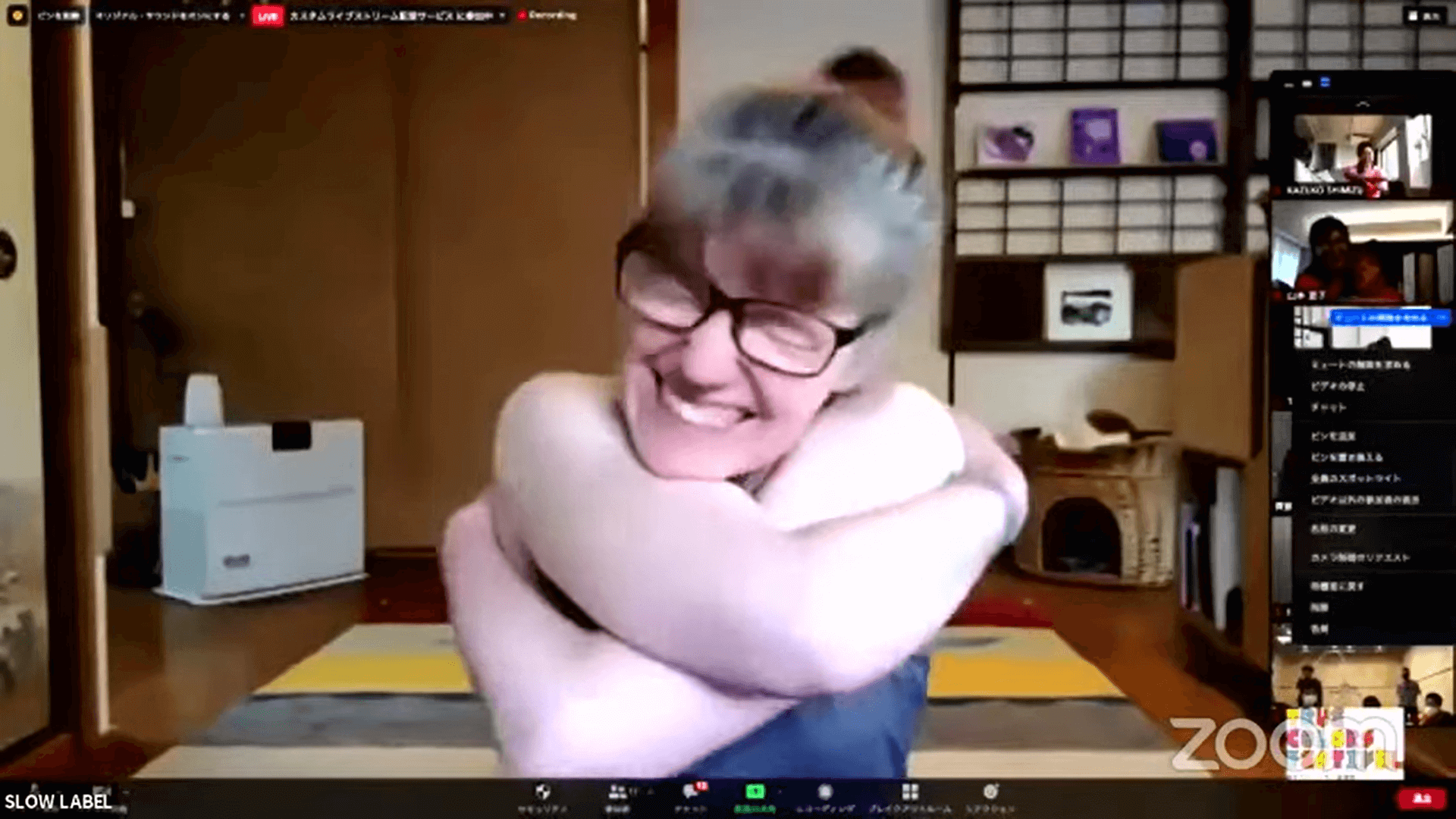 Did you, readers, receive her power of love?

In the morning of Saturday, everybody still has tiredness from weekday working, however, we could make our hearts and bodies warm with the workshop.

And, the performers got the “Hugs” and the “Power of Love” from the participants, they restarted to do rehearsal with them.
To the show, we have 3 more weeks! I’m wondering how good the show is. 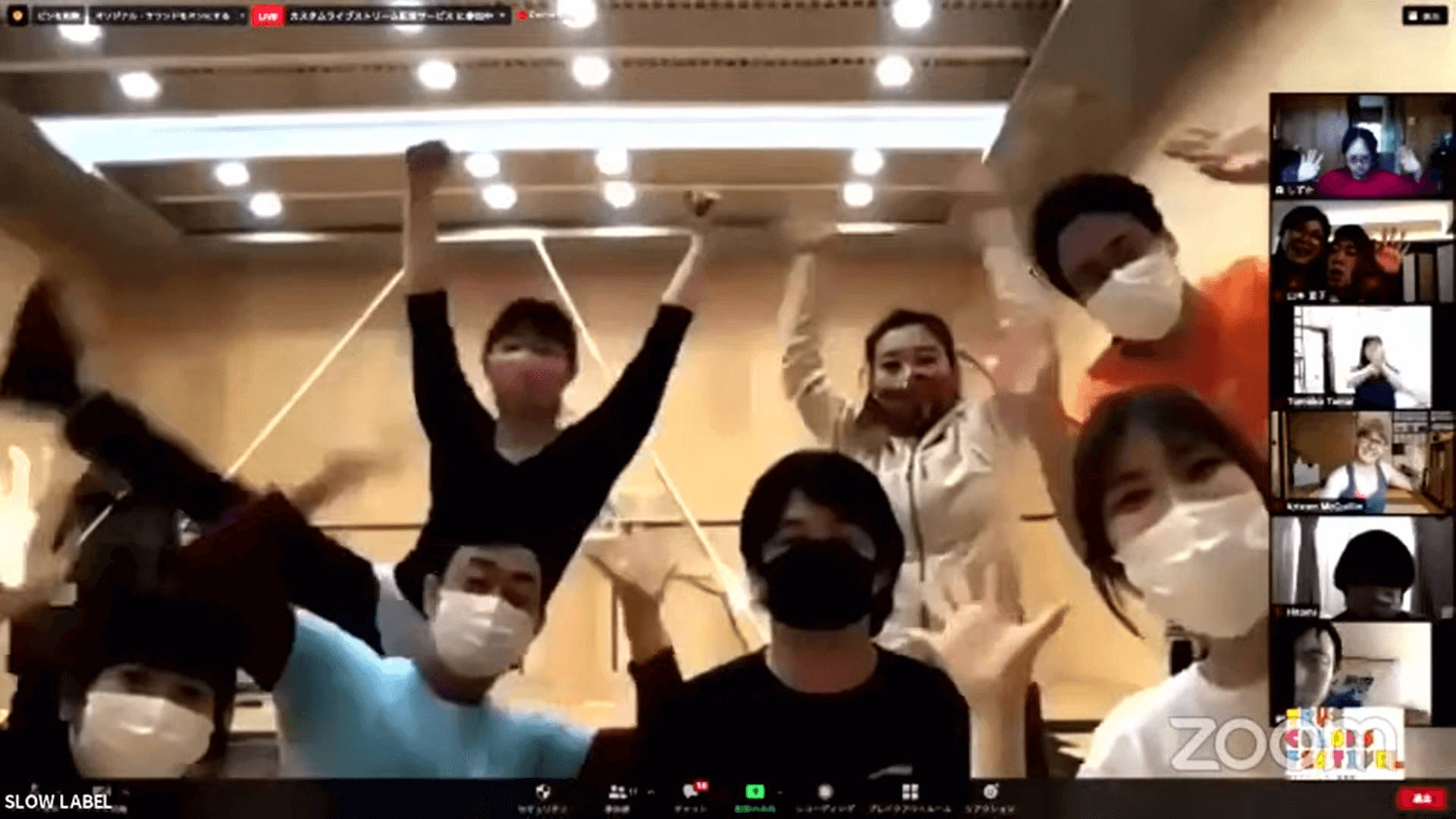 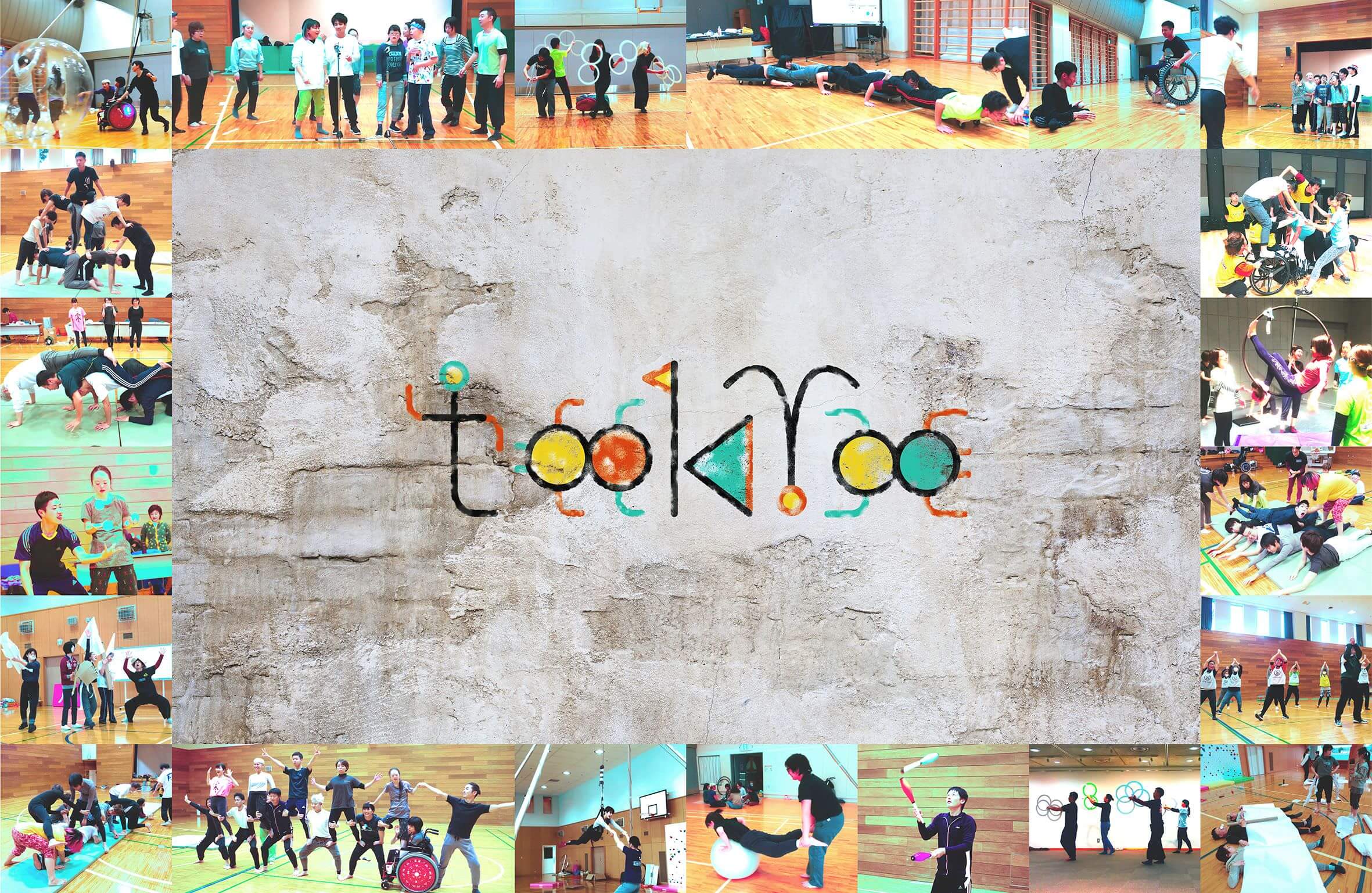 The first Japanese “SOCIAL CIRCUS” company was established by SLOW LABEL. Due to its features the “SOCIAL CIRCUS” model is becoming widely popular in Japan. This is because the SOCIAL CIRCUS increases social opportunities, wellbeing, and the overall profile of creative people living with disabilities. Now various people, who have different background, nationalities and genders, also whether they are with or without disabilities, join the “SLOW CIRCUS PROJECT,” and practice works and do workshops.

Together with local and international artists, SLOW LABEL identifies issues faced by communities and designs systems for people/things/activities through bringing together experts, local citizens, enterprises, and government bodies that lead to solutions from the minorities’ point of view. While always questioning their own ethos and never fearing change, SLOW LABEL aims to achieve a diverse and harmonic society through recuperating a sense of “slowness”.
Official Web Site

What is “True Colors Festival” ?

True Colors Festival (TCF) presented by The Nippon Foundation is a series of performing arts events presented across geographies, in celebration of diversity and inclusion as “One World One Family. “Through festivals since 2006 in Vietnam, Cambodia, Laos, Myanmar, Singapore, and Japan, TCF has presented more than 1,100 performing artists from more than 30 countries and attracted more than 40,000 people. The re-start of TCF 2020/2021 marks its commitment to tap on the power of the arts to connect artists and audiences in experiences such as music videos, film screenings, children’s programs, musicals, concerts, and workshops.